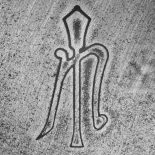 Due to wrong way of storaging it the padding and straps of my blackend Kalotta got mouldy.

But with this I had a reason to redesign this helmet. The complete armour of the charakter it was made for will slowly shift from 12. century to 14. century. So this was the chance to start this transformation.

The plan is to add an chainmaille aventail with eyelets to the helmet.

first everything had to be dismantled and all the rust and the old blackening must to be removed.

To remove the rivets I ground down their heads to about 1mm thickness. Than I hammered the rivet shafts thru with a drift punch (from the head pushing inside). Thereby the rest of the head is sheared of and looks like a washer.

Cleaning the inside I´ve done the easy way and used a rough scotch bride pad.

The eyelets consists of a 5mmx20mm steel roundstock and a 16mm long piece of steel tubing (outer diameter 8mm by 1mm wall thickness).

I wasn´t able to weld this pieces with my MMA welder so I brazed them together. 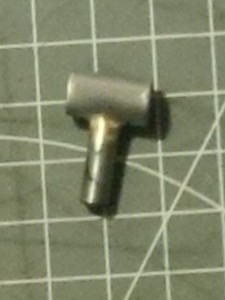 I filed the endpieces from a 10mm round stock. The main stock removal I did with a bastard file on the workbench. The rest I did afterwards on my improvised lathe. 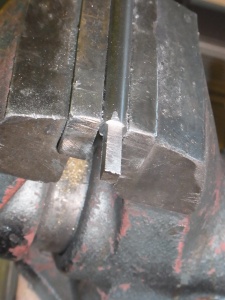 Stock removal for the endpieces

Than I switch to my drillpress and just it like a lathe. I pressed the file against the spinning workpiece to achieve the desired form and smoothed everything out with sandpaper. 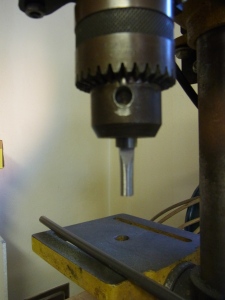 And hier is the finished endpiece 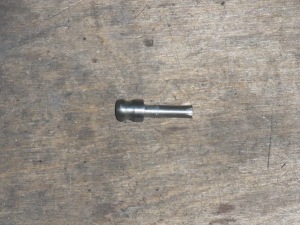 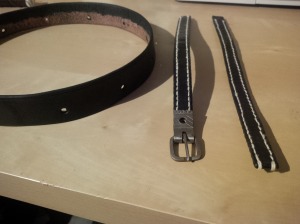 After the first fire-blackening of my Kalotta gone wrong I did some tests to improve.

The results are that I will use a solution of linseed oil and 1/20 part sulfur that I dessolve by 150°C. (attention using a thermometer is necessary cause linseed oil is quite inflammable). 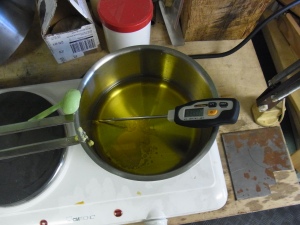 All pieces must be clean, free of rust and degreesed.

The blackening starts by heating up the pieces to round about 80°C. This preheat should not extend to 100°C or more and when temper colors appear they must be sanded away. 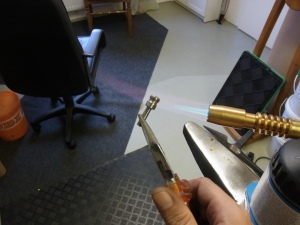 Then the linseed oil-solution is applied as a thin coat on the workpiece. There shall be no drops or schlieren on the surface. Now the workpiece is heated slowly again. First a browning should appear.. 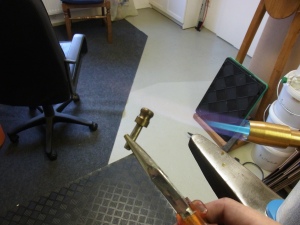 Browning of the workpiece

When the temperature reaches round about 300°C the blackening happens and the workpiece starts to smoke. The blackening is finished when there is no smoke visible anymore.

Normaly one blackening cycle is not enough. I repeat this process till the part is deep black. 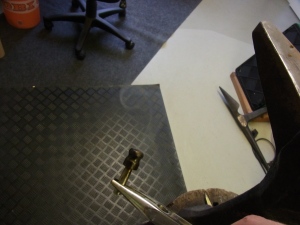 Now I rivet all parts together. Important for the eyelets was to support the eyelet in a leadblock and to put a small roundbar into their holes. That prevented the eyelets from being deformed. 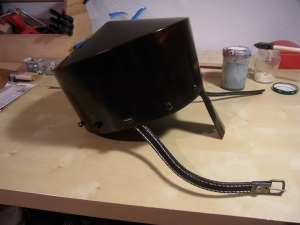 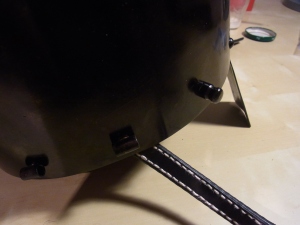 I have done the lining from 4 layers of linen (each one inner/outer layer and to layers for padding). The four wings of the padding are held together at the top with an arming point. 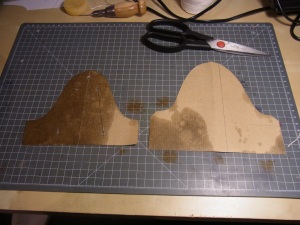 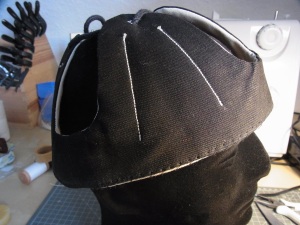 Then I saw the lining to the lining band. For this I stitch a hole every cm with an awl and sew both pieces together with a waxed linen thread. 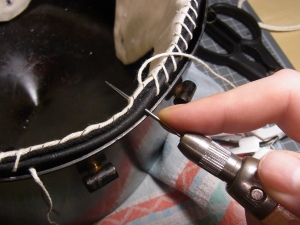 Stitching with an awl 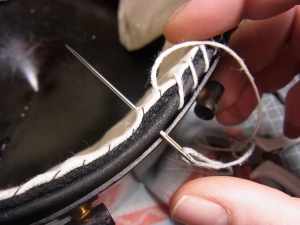 And here the lining is finished 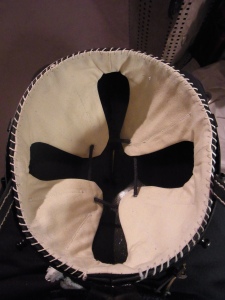 I start with the aventail-band that will be put on the eyelets. The band will be made from 4mm leather.

I made a template with tape directly on my Kalotta. With this I prepare a straight leather strap. On the rear I mark the corners of the eyelet-holes and pierce them with an awl. 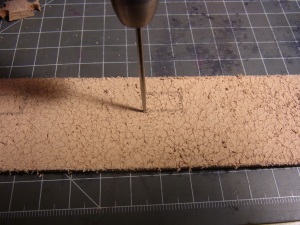 Then I punch all corners with a 6mm holepunch and cut out the squares with an Xacto knife. 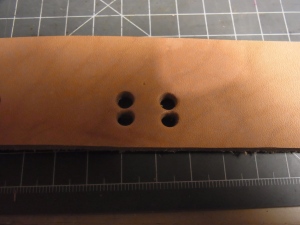 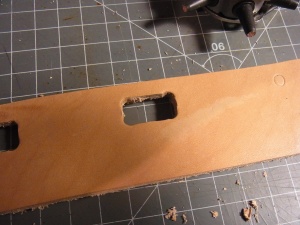 I use a keyfile and sandpaper to smoouth out the holes.

The band is than dyed with a darkbrown leatherdye. 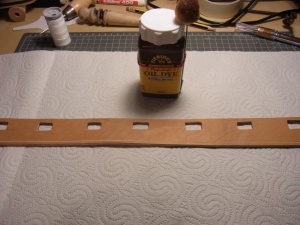 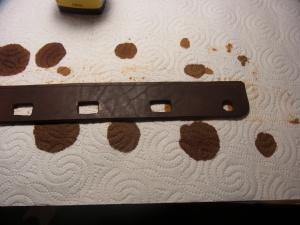 I add a groove for the later attachement of the aventail. After waxing and smoothing all edges with a slicker the band is ready. 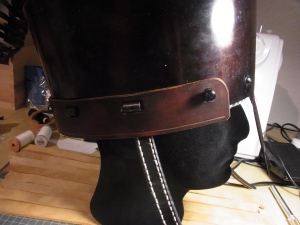 The padding is made from for pieces (two for the frontside, two for the rear). The lower edge is longer than needed and will be cut back according the chain maille aventail. 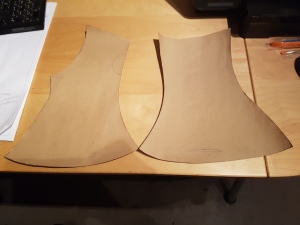 The padding has 4 layers. Each one layer of linen for the inside/outside, one thick layer of gray woolpadding and one layer of tentlinen to stabilize everything. 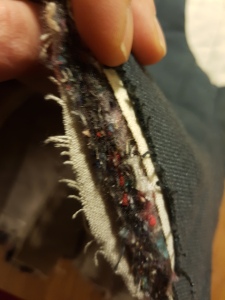 The finished padding will be attached to the aventail band sandwiching the chainmail in between. 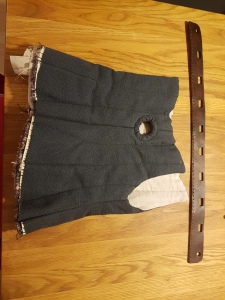 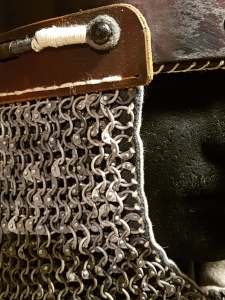 Then the loweredge is trimmed and the chainmaille is rapped around the lower corner and sewn into the inside of the padding. 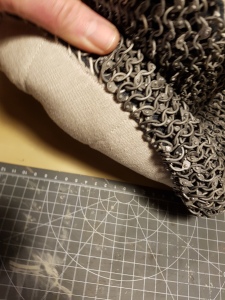 Inside view of the lower edge of the aventail

And the helmet is finished 🙂 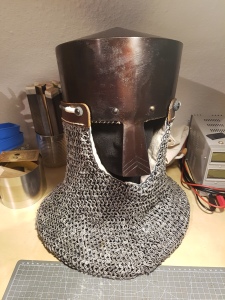 2 comments on “Restoring my old Kalotta”